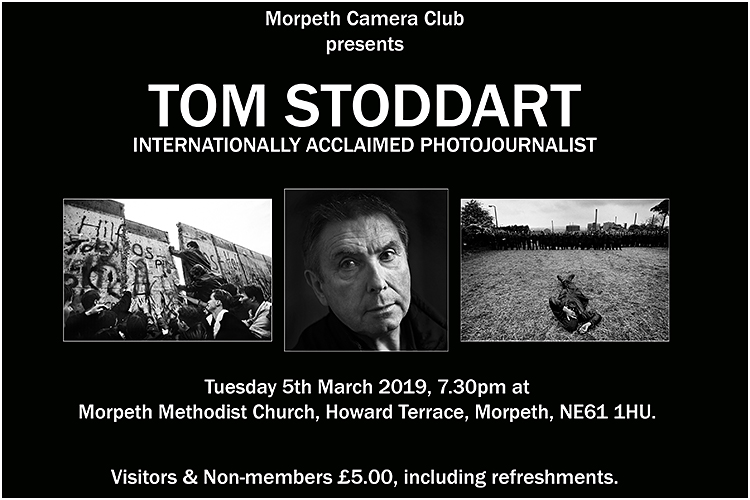 Tom began his photographic career on a local newspaper in his native North-East of England. In 1978 he moved to London and began working freelance for publications such as the Sunday Times and Time Magazine.

During a long and varied career he has witnessed such international events as the war in Lebanon, the fall of the Berlin Wall, the election of President Nelson Mandela, the bloody siege of Sarajevo and the wars against Saddam Hussein in Iraq.

In 1997 Tony Blair gave Stoddart exclusive behind the scenes access to his election campaign, as the Labour Party swept to victory after 18 years of Conservative government in the United Kingdom. Ten years on he photographed Gordon Brown as he replaced Blair as Prime Minister.

His extensive work on the catastrophic AIDS pandemic blighting Africa has been widely published and exhibited.

Now established as one of the worlds most respected photojournalists, Stoddart is represented by, and works closely with Getty Reportage, to produce powerful photo-essays on the serious world issues of our time.

Tickets can be reserved (and collected on the door) by contacting Stephanie Robson (Publicity Secretary, robson-robson@hotmail.co.uk, or by visiting the  website (www.www.morpethcameraclub.co.uk) and leave a message via the contacts page.

This website uses cookies to improve your experience while you navigate through the website. Out of these cookies, the cookies that are categorized as necessary are stored on your browser as they are essential for the working of basic functionalities of the website. We also use third-party cookies that help us analyze and understand how you use this website. These cookies will be stored in your browser only with your consent. You also have the option to opt-out of these cookies. But opting out of some of these cookies may have an effect on your browsing experience.
Necessary Always Enabled
Necessary cookies are absolutely essential for the website to function properly. This category only includes cookies that ensures basic functionalities and security features of the website. These cookies do not store any personal information.
Non-necessary
Any cookies that may not be particularly necessary for the website to function and is used specifically to collect user personal data via analytics, ads, other embedded contents are termed as non-necessary cookies. It is mandatory to procure user consent prior to running these cookies on your website.
SAVE & ACCEPT